Conifers are widely-diverse and attractive evergreen trees (pines trees) that have immense ecological importance on Earth. They are woody plants with secondary growth, producing an eclectic variety of yields like seeds, flowers, fruit, and more. The softwood obtained from them is of huge economic value, giving us paper, timber, and even plastic. About 45% of the world’s lumber comes from evergreens. Needless to say, they are highly-beneficial pine trees with even more interesting facts to learn about them.

The word “confiner” comes from the Latin, “conus”, meaning “cone”, and “ferre”, meaning “to bear.” These words refer to the pine cones that conifer trees produce in the late summer and early fall. Coniferous fossils have been found that date back as far as 300 million years ago during the Paleozoic period. They are known as one of the most ancient species of tree on the planet. In fact, the tallest, densest, and oldest living trees on Earth are all conifers!

Coniferous trees retain their foliage and stay green all year long. Most have a similar structure: a single straight trunk with side-reaching branches. They have their own built in first-aid kit and pest deterrent as well, known as resin. This resin, or sap, gives evergreen trees their distinct piney scent; but more importantly, the sap protects open wounds against fungal infection, and fends off nuisance pests. Their foliage is made up of needles, rather than leaves you see on deciduous trees (with the exception of Lawless Cypress and other Cupressaceous species). These needles shed once per year, but not before turning a bright orange or yellow first.

There are several types of coniferous trees, including Cedars, Redwoods, Hemlocks, Spruces, Firs, and more. They are in the kingdom of Plantae, the Division of Pinophyta (also known as Coniferophyta or Coniferae), the Class Pinopsida, the Order of Cordaitales (or Pinales), and finally, the Family of Pine. Here are some of the most common and well-known conifer trees we treasure so dearly: 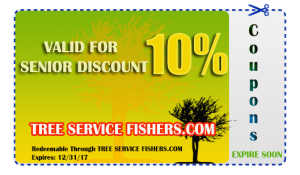 Call 317-537-9770 for affordable tree service in Fishers, Indiana. We are highly trained and experienced tree care technicians that offer a wide range of residential and commercial tree services, including tree trimming, some grinding, tree removal, lot clearing, and much more. If you have a tree problem, we have the affordable solutions! And on top of competitive prices, we offer tree service coupons! Call 317-537-9770 to request an estimate for Fishers tree service, today.

Landscaping trees add value, beauty, and convenience to a property. For this reason, routine tree service is a wise investment. Regular scheduled tree care generally includes services like tree trimming, tree pruning, tree fertilizing, mulching, sitting, crown reduction, and more. But a commonly overlooked tree service is also helpful for properties and beneficial for trees. This service is called tree spraying and can drastically improve the overall health of your trees. Continue reading to learn more about tree spraying, and the various benefits it can provide for your beloved landscaping trees.

Tree spraying involves using specialized equipment to apply protective coats of safe, chemical pest controller to the foliage and bark of trees. The primary purpose for tree spraying services is to prevent nuisance pests and pest infestations. Not only can pests be a nuisance to homeowners and reduce the quality and convenience of your property, they can also severely damage or kill trees overtime. Common tree pests include aphids, termites, larva, beetles, Emerald Ash Borers, pine borers, and more. Spraying trees can protect them from pests and allow them to flourish safely and naturally.

Although tree spraying is the most common routine tree service for pest control, there are additional options to choose from as well. These services can be used individually or in combination with tree spraying to help control pest damage. These services include tree trunk injections and soil injections. Ask your Fishers tree care company to learn the best pest control plan for your property.